skip to main | skip to sidebar

The "rice-and-beans" of Brazilian food 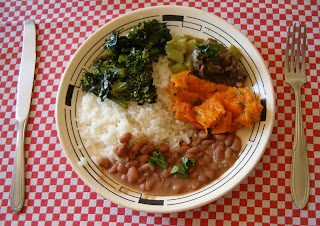 Rice and beans are so important for Brazilian cuisine that when we say something is “o arroz com feijão” (the rice and beans) of something else, we mean “the basics”, “the foundation”. So, let me try and explain some of the most basic, general differences between Brazilian and North American eating habits and their food staples to start with.

Brazilians usually have three main meals a day - a light breakfast right after waking up, a substantial lunch between noon and 2 pm, and dinner around 7 or 8 pm - in general, lighter than lunch (a full size soup with bread, or a salad, or some pasta, etc). 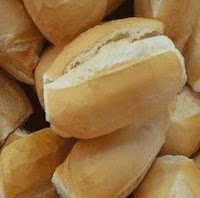 For breakfast, most people have coffee (strong coffee!), or coffee and milk (called “média”, when it's lighter, or “pingado”, when it's darker), and “pão francês” (similar to a baguette, but smaller and with a softer center - see picture; I’ll write more about it later) with butter. Some people make the meal more substantial by adding some cheese and ham to it, but bacon, sausage and even eggs are regarded as lunch / dinner (or maybe brunch) items, not breakfast. A variety of fresh fruit and their juices, sometimes mixed with milk instead of water, may be consumed as accompaniments. And there’s also the “pão de queijo” (a savory tapioca starch roll with cheese)... But this is worth a post itself, so I’ll leave it for later (pão de queijo post here).


For lunch, people usually have rice and beans, a small amount of protein (about 5 oz; beef, chicken and pork are the most popular meats), at least one cooked vegetable (frequently braised) - such as pumpkin, chayote, and broccoli, shown in the first picture of this post - and salad greens (lettuce, arugula, watercress), with tomatoes and/or other raw or cold additions, such as grated carrots or beets, hearts of palm, cucumber and sliced onion.

Well, this is the basic “rule” - which means there are countless exceptions. My point here is just to state that: i) rice and beans are the base of Brazilian cooking, and the preferred accompaniment to everyday meals, as opposed to, say, mashed potatoes in the U.S.; ii) although meat is an important part of the meal, it is usually consumed in smaller amounts. In a country where hunger has been an issue for so long, the “rice-and-beans” diet may have saved many impoverished people from starvation and even malnutrition, as rice and beans, when eaten together, constitute a high-quality, or complete, protein - containing the 20 essential amino acids.


Brazilian rice is prepared more or less like a pilaf, but the fat of choice is vegetable oil (a plain, flavorless one, preferably) - as you can see in the recipe below. Beans are mostly cooked in a pressure cooker with water only and, after that, seasoned with garlic and salt, among other things (later I’ll post the recipe for cooking beans in a pressure cooker; for now, check the recipe with canned beans).

There are many types of beans in Brazil - the largest consumer and producer of the legume in the world, with approximately 3.5 million tons harvested every year. The most popular beans are “feijão carioca / carioquinha” (similar to pinto beans), with 85% of the market, followed by black beans, with 10% (more common in Rio de Janeiro state, but mandatory in the preparation of the Brazilian national dish, “feijoada” - more soon!). The remaining 5% of sales are specialty beans, such as “jalo”, “fradinho”, “rosinha”, “bolinha”, “branco”, “verde”, “azuki” and “roxinho”.

- If rice is not pre-washed, rinse it until water is clear and let it dry in a colander before using. Beware that you’re probably going to use less water to prepare it in this case.
- Heat oil in a saucepan and add onion. Fry over medium heat until it is soft and translucent.
- Add rice. Fry, over medium heat, stirring constantly, until grains are whitish and chalky (grains start forming lumps).
- Add 1 1/2 cups of the water and the salt. Stir well. When it starts boiling, lower the heat and cook, partially covered, until water has almost completely evaporated.
- Add remaining water (less, if rice was rinsed) and continue cooking until all water has evaporated and the grains are cooked but slightly al dente (cooking will continue after you turn off the heat).
- Cover the pan, remove from heat and let stand for a few minutes. Fluff the rice with a fork before serving.

- Place the beans in a colander and rinse in cold water until there’s no more frothing on top of the beans.
- Heat oil in a small saucepan over medium heat. Add bacon, if using, and fry until golden brown.
- Add chopped garlic and fry until golden brown. Lower the heat.
- Add beans and, using the back of a spoon or ladle, smash some of the beans into a paste.
- Add about 1 cup of filtered water. Bring to a slow boil and cook until the broth is thick (heavy cream consistency) and brown colored - you might need to add a little more water. Season to taste with salt. Add chopped green onions or chives before serving. 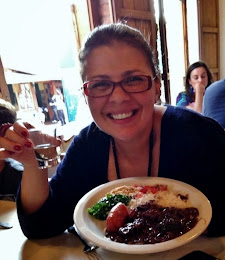 Elisa D. Teixeira
Ann Arbor, MI, United States
I'm a Brazilian living in the U.S. I've finished my PhD in English in 2008 (Translation Studies, Corpus Linguistics and Terminology are my main research areas). In December 2012 I've finished my A.A.S. in Culinary Arts at El Centro College, in Dallas, TX. I work as a freelance translator of cookbooks. I'm also a Corpus Linguitics researcher and author, and contributor to Mapa da Cachaça website. In January 2013 I moved to Ann Arbor, MI, and since then I've been working part-time for the University of Michigan as Project Manager for Global REACH's Brazil Platform.